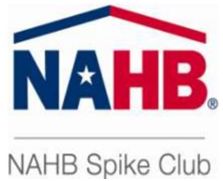 Membership development is vital to the future of any association. The continuous influx of new members and the retention of current members are critical for maintaining NAHB’s powerful voice in the homebuilding industry. Your membership is one of the most valuable resources for building your association. Just as a nail in the home building industry is essential to the development and strength of a building, volunteers who recruit and retain members play a vital role in the growth, development and stability of an association – they are our “Membership Champions.”

Back in 1953, in an effort to recognize and reward dedicated members who worked to recruit, involve and retain members, the NAHB Spike Club was created. Over the years, the number of Spike Club members has grown to more than 16,600 — including Builder, Associate, Affiliate and Peer members.

You earn 0.5 Spike credits if the member you recruited renews his or her membership.

Only individuals can earn Spike credits. Credits can be awarded to members, or to employees of members, but not to companies.

You may not sponsor or earn Spike credits (new or renewal) for your own membership.

If you transfer membership to another local association or changes companies (employers), you may transfer your Spike credits by written request to the NAHB Spike Club.

Beyond the Life Spike level, you can work to achieve the following levels each with its own special recognition:

For a list of Spikes and their current credits – Watch for the monthly BCA e-mail report or contact the BCA office at 208-377-3550.